Where does it come from? For me it comes in many forms such as the beauty of a place, the serene ambiance of a location, the waterfall that lies to one’s back, the birds chirping in the trees, the aesthetics of the rock and the movements of a route, the history of a climb, the people we climb with and the energy they bring; all of these things bring me inspiration, all of these things drive me to want to climb and appreciate the simplicity of doing it. Seeing new places and learning new routes, these too add to my inspiration. For some months Ben and I had plans to travel to Utah to shoot a wedding for some friends; we planned on making a climbing trip out of it. I had yet the opportunity to check out the limestone of southern Utah and so a new place with new routes was on the horizon – new inspiration. However, forming a routine also really inspires me and this can lead to be reluctant to leave a place (especially Yosemite), especially when the weather is good . But I realize that sometimes getting settled into what is comfortable can leave me lacking. Regardless, when it finally came time for Ben and I to make good on our plan to head east to Utah for the majority of November I did so with a little hesitation.

We had been enjoying quite a wonderful Fall in the Valley. We both made an ascent of the ultra-classic and technically challenging Kurt Smith testament to the ground up standard “Keeper of the Flame” – a beautiful, thin line that goes for about 130 feet clocking in at 5.13. I believe this to be another first female ascent for me. We had also been spending some time climbing on the South Face of Half Dome and inspiration was high. The location, the remoteness (although cell reception is better no place else than back there), the rock quality, the difficulty – it was all giving us so much. Ron and I had also been enjoying some climbs of the day on old, obscure, classics such as Pat and Jack’s “Cat Squirrel” and the Owl’s “Mirage”. But our time was drawing to a close and although snow had been falling conditions were due to only get better. Yosemite is perhaps the place that inspires me the most and with that comes a huge list of routes to do and boulders to scramble and my feelings were mixed about leaving. I had to remind myself that the rocks and the routes would be there when I return, so no need to fret over wanting to do it all in a hurry. Besides, we would be heading to some of the best limestone in the west, it couldn’t be so bad. 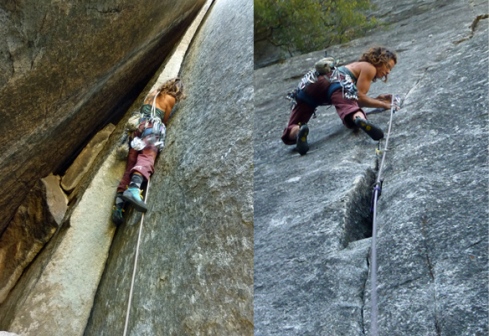 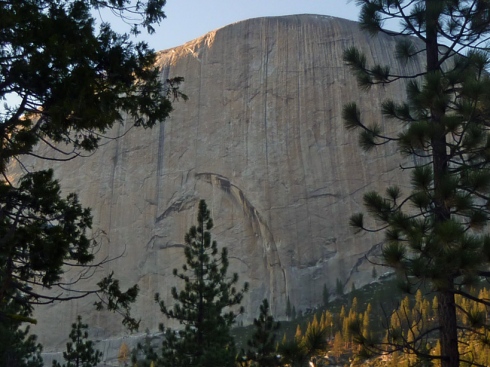 Our first day climbing we went to the Virgin River Gorge. As we pulled into the parking off of I-15 my eyes widened with excitement. The wall was steep, featured and draws seemed to hang from almost every route. I was excited to finally see the famed VRG. I had heard plenty about the freeway but I was still shocked at the crag’s proximity to the road. A quick ten minute approach in which one has to cross under the freeway to get to the cliff- walking amongst dirty diapers, discarded condoms, dismissed beer cans and other signs of the seedy underbelly of humanity had me marveling at the juxtaposition. It was like passing through hell to get to heaven. At the base of the wall Ben rattled off a slew of names and grades neither of which I heard very clearly over the buzz of the cars below. It all looked good and I was at a complete loss for what to tackle first. Thankfully I was defeated in our match of Roshambo and I could let him give me a tour. Watching him on the warm-ups I realized very quickly how steep the wall really was. I climbed a few pitches and was feeling pretty good about it all before I was thwarted by a pumpy and powerful 12c. I was surprised, confused and started to find it harder and harder to concentrate. The constant clamor of I-15 was taking over my mind. I was losing psyche and growing more frustrated by the minute. My inspiration was disappearing as I became mesmerized by the freeway. It was like looking at something too hideous to look at but for some reason not being able to turn away. If only I could look away, tune it out, concentrate; I struggled with myself. I belayed Ben on a few more pitches and much to my relief the sun set and we were able to leave this place with it’s bittersweet position. 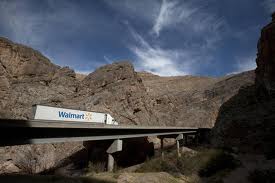 Thankfully the next day we went to the Cathedral – a beautiful limestone cliff with a 30 minute approach out in the Utah hills. There were no cars, no rumble of the road and no problem hearing your partner. The rock was just as amazing as the VRG. Inspiration was back up! I was psyched. Coming from Yosemite my fitness level was pretty high but my mental preparedness for overhanging routes wasn’t as high. It took some getting used to for me to come out of my comfort zone and to climb spread out. It took some getting used to in general. I had to try hard, I had to take the big whips, I had to let go of the fear of falling and know that the falls were clean – there were no ledges to hit or pieces to pull. I had to get out of my trad mind and get into my go for it mind. It took a lot of work and by the days end I was tired.  After a day’s rest we were back at the Cathedral and after a few days of climbing there I had found my groove. I made an ascent of a 13 called Holbytla that proved to be quite a little battle and a great learning experience. Around the 7th bolt there is about 15 to 20 feet of a boulder problem on steep, sloping pockets.  Nothing felt positive, nothing felt solid. Skipping the crux clip I took fall after fall. The cold was causing my hands to numb out up there and I realized that I wasn’t really pumping off but more just letting go. I needed to just hold on and keep moving, not let go. I wanted the holds to be better but they weren’t. I needed to accept the route for what it was and adjust myself to it. I needed to just go for it to keep moving upwards with no doubt or hesitation. After realizing this I was clipping the anchors and feeling like I had learned a valuable lesson in rock climbing.  Using my new-found spread out, hang on and go for it approach I made an ascent of a really stellar 13b called Resurrection a couple of days later. I think I could have stayed out there indefinitely but once again the temps were dipping and it was time for us to head out.

Conditions wouldn’t be so harsh at the VRG Ben informed me. My heart sank a little but I knew it was inevitable that we would be going back there. I readied myself for the traumatic experience. I told myself that the freeway actually sounded like waves breaking on shore. I hoped this would inspire me. I tried hard, I pulled hard, I crimped hard. I used the power I had found at the Cathedral to fuel me. It worked for a while. But after 6 pitches and considering going back up on the epic Fall of Man I just couldn’t muster an ounce more of psyche. I was over it and lapsed into unmotivation and started to beat myself up about it all over again.

I really wanted to like this place, I wanted to try hard in the face of failure, I wanted to push myself to new levels of inspiration but I was struggling. The road noise, the shade, the cold rock, the overhanging wall with its huge reaches and slimy holds were all overwhelming me. I was losing my power. Once again the sun set and we could leave. I walked back to the car, crossing under the bridge to hell with my head hung low. I felt like I had failed in some way. I felt like I had let myself down by not pulling through and maintaining a positive outlook. Back in the hotel I turned on the TV and tried to push aside all thoughts of climbing. The channels were filled with things like Real Housewives of Atlanta, Lady Hoggers, Millionaire Matchmaker and terrible news programs. I searched the channels for inspiration and I wondered what the hell was wrong with us people? What is it that we are doing with ourselves, to ourselves and to the world? I came to the understanding that I should be inspired by the simple fact that I have the opportunity to go rock climbing, that I have the choice to be free in myself and enjoy the act of moving over stone.

Back at the VRG the wind whipped against the rock, the cars rumbled below. My body felt stiff and my mind tired. In the warmth of the hotel room finding inspiration seemed easy, out here I was going to have to dig deep, to think about being thankful for the day, thankful for climbing. I would let the rock inspire me. I tried hard. The warm ups felt hard, I felt less than good. It would be a practice day – I would use it as an opportunity to do moves, hold onto holds and enjoy the process of doing that. I tried Fall of Man a couple of times with no expectations, just practice. I did better than I thought I might do. I made it to  a new high point past the crux before faltering and just missing a crimp with the left. I fell and I lowered. Looking back on that I know that I stood in the way of myself. I had stopped myself from doing the move, from grabbing that hold. I realize that still in me after all the red-points and onsights that I still carry a fair amount of doubt.  After the lesson I thought I had learned at the Cathedral I still hesitated. While reaching up for that hold I didn’t believe enough that I could do it, that it was ok to grab it.

We left the VRG in the cold of the late evening and headed back to Bishop. I was bummed to leave with unfinished business. After all the dis-ease and dislike I had I found myself almost begging Ben to let us stay just one more day in the hopes of getting to climb Fall of Man one more time, but the temps were too frigid to climb anymore and it was clear that we should head home. On the drive back I thought about Jerry Moffat, I had just finished reading his autobiography and the take home message I got is that if you want something then you go for it 100%, with no doubt, no hesitation, with only positivity and inspiration. Back here in the warmth of our house in Bishop I’m using my new inspiration. We will return to the VRG in the next months I’m sure and I will let myself do Fall of Man then but in the mean time I’m climbing with more purpose than ever – I’m going to go for it 100% with no hesitation and no doubt, with positivity and inspiration.

A Louisiana raised California climber. END_OF_DOCUMENT_TOKEN_TO_BE_REPLACED
This entry was posted on Saturday, December 10th, 2011 at 10:15 pm and posted in Uncategorized. You can follow any responses to this entry through the RSS 2.0 feed.
« Sublime Sending Summer
Grand Illusion »