From Squalor to Baller

About two weeks ago we arrived here at Ceuse with nothing more than some clothes, a small tent, a whisper lite stove, some climbing gear and a few days worth of food. Upon arriving via a series of train rides, bus rides, and hitched rides we inhabited a campsite situated under some hazelnut trees. We chose such said site because strewn about in its vicinity were two small wooden tables, a couple of white plastic chairs, a few pallets, some string and a tarp very crudely rigged between two trees. This place had potential! So, we happily moved in making quick use of all inherited items.

We restrung the tarp, moved the tables under it, set a chair on either side and soon enough we had a nice little kitchen built. The tent we placed under one of the trees. I should mention that the tent we have is minus a rain fly, thus making any sort of wet weather a somewhat iffy scenario for us. Before we left Grenoble for the country we went on a search for tarps at various outdoor stores and paint shops. Oddly enough it seems that the French don’t have such a huge market for them and all we came up with was a small plastic sheet that barely covered the tent. And with some rain on the projected forecast we chose the spot under the tree offering the most weather cover and rigged the plastic sheet over it hoping for the best.

A few days into our stay while at the dumpsters relieving ourselves of our trash we acquired some more discarded campground items. A small la fuma chair, which was broken but usable (for a while at least);  a little butane stove, which had a melted plastic cover but also seemed useable; and best of all two perfectly edible carrots, which allowed us to stretch our food supply a couple more days.

We got lucky for a bit with the weather and had about ten days of blissful tent living. With the newly inherited second stove we also enjoyed many delicious meals of stir fried delights, pasta with sausage, lentil soups, fresh picked apple tarts, and our new favorite snack Nutella wrapped in cabbage! But, as the saying goes all good things must come to pass and with that came the rain. It did, however, work nicely with our schedule as the bad weather moved in with our planned rest day. And, so we huddled in our leaky little tent until things were so damp and cold we could take it no longer.

Ceuse has some of the best accommodations of any campground I’ve ever seen. In addition to  a barn with a ping-pong table and climbing wall they also have a few caravans for rent. Once we were good and soggy we decided to go big and take up residence in one of these little tin cans. In a matter of minutes we went from squalor to baller from dirt bag to trailer trash! And here we are today living the good life of climbing until exhausted, eating until full, and sleeping in a bed with a roof over our head. Yes, indeed the living in Ceuse is easy. 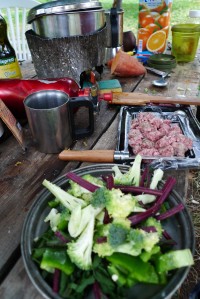 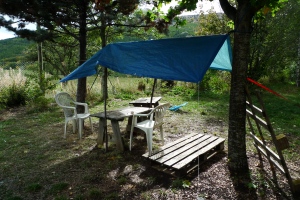 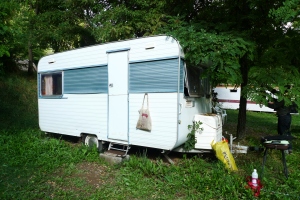