I was invited to a dinner party at 7:30 on Tuesday night, by an old acquaintance, at the house of a very generous and welcoming couple, Tony and Olivia. She baked a delicious leek tart with Wasabi mashed potatoes, green salad and there were some great beverages as well. Another couple, Dan and Ally arrived. It was Ally’s birthday and some other people came to join in the celebration. At some point after dinner someone started talking about Jambalaya and my ears perked up. How could it be that out here in the high desert of California someone could know about Jambalaya? I was interested so I listened on. The words boiled Crawfish fell out of Dan’s mouth floated across the room and hit my eardrums! In my most flattering, southern, ghetto-esque accent I blurt out, ” I’m from Louisiana, what y’all know ’bout eatin’ crawfish?” The room exploded with laughter. Dan went on to tell a story about being in Alabama with his dad and their waitress explained to them that the proper way to eat crawfish is to suck the heads. I energetically replied, “Hell yeah, that’s the shit!” More laughter proceeded and that inspired me to go into great detail about sucking heads and how good it is. I further went on to explain that the real dirty south way is to stick your pinky in there, pull out the good stuff and eat it. The room was in shock and there was Dan, on the couch looking at me with eyes wide. In between bouts of laughter he managed to allude to the fact that he was a little enamored with me and now I had just floored him. He lay there almost quivering as his wife laughed hysterically. And I sat there almost naïve to what I had just done. From the corner of the room someone said, “Wow, I had no idea.” And I then realized what had just gone down. I blushed and made my way to the kitchen for a drink of water. 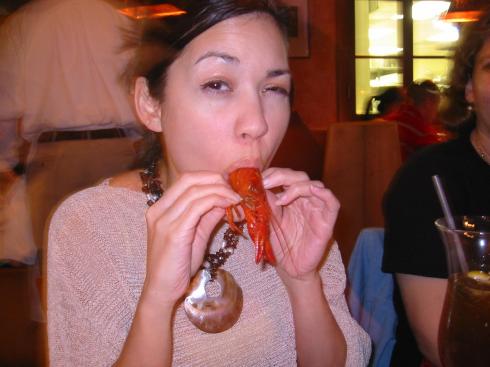 A Louisiana raised California climber. END_OF_DOCUMENT_TOKEN_TO_BE_REPLACED
This entry was posted on Thursday, January 21st, 2010 at 10:52 pm and posted in Uncategorized. You can follow any responses to this entry through the RSS 2.0 feed.
« Bird Meets Bishop
Inspirations »

One response to “I’m fun at Parties!”